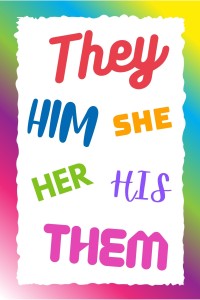 You may have seen gender pronouns in the media or in the workplace written as he/him, she/her or they/them. Gender pronouns are a way of expressing one’s chosen gender identity, which may not necessarily be the same as the sex they were assigned at birth. For example, a person may have been assigned male at birth but could identify themselves as they/them because it feels more suitable or relevant for that person.

While gender pronouns are used widely in the transgender community, more and more non-transgendered people are using them to express themselves and raise awareness of gender identity to help others who may be nonbinary.

Using a person’s correct pronouns is a way of showing respect, acceptance and understanding. Whether they are friends, family, neighbours, or colleagues, getting the pronouns right shows that you care about an individual and their wellbeing. It’s important in the workplace because it creates a sense of belonging and paves the way towards a welcoming environment.

If you’re unsure about how to address someone correctly, please do ask them their chosen pronouns rather than making assumptions and misgendering them. If you accidentally use the wrong pronoun, simply apologise and correct yourself for next time – the person you’re speaking to will appreciate the effort you’re making.

There are many ways you can raise awareness about gender pronouns and gender identities. Consider sharing your pronouns on your social media profile or include them in your email signature. If you’re hosting a group meeting, you could mention your pronouns when you’re introducing yourself and encourage others to do the same. If you’re organising a social gathering with people who don’t know each other you could even create name badges or nameplates which include their pronouns, making it easier for people to communicate with each other.

Some great eBooks on gender pronouns and gender identity:

How to They/Them – Stuart Getty

Beyond the Gender Binary – Alok Vaid-Menon